This entry was posted in random and tagged netflix, Spanish on December 3, 2020 by Kelly .

With the myriad of streaming platforms available nowadays, there's plenty of entertaining real-life materials you can use to learn Spanish. Actually, there are so many options to pick from that it boggles the mind.

So, if you are looking for a way to pick up a little language to impress a colleague, or brush up on the Spanish you already acquired before an upcoming trip, you are definitely in the right place!

It's been hard to pick, but here are five of the best we think you will really enjoy.

If horror is your thing then Verónica is a great introduction to Spanish film! This has been hyped up on Netflix recommendations for a while now and it's easy to see why.

Verónica is a teenage girl who takes part in a seance with some school friends and in doing so unleashes an unseen, evil force that wreaks havoc on her life, terrorising both her and her family.

What makes this extra creepy is that the film is loosely based on real-life events, which might make you think twice about reaching for the nearest ouija board!

The language pace is a little fast but manageable, with no overly complex terminology to trip you up. Though you will learn a word or two in the horror genre!

The Distinguished Citizen will appeal to anyone who has lived away from the town where they grew up and has reason to return home. A Nobel Prize author returns to his home town in Argentina after several decades living abroad in Spain when he is asked back to receive a prize.

Daniel Mantovani is confronted with both parts of his home that have stayed the same, and things that have changed for good. What is nice from a language perspective about this film is that we hear European Spanish as well as Argentinian. The Distinguished Citizen is both funny and moving, and a great introduction into using films as an aid to studying!

How have you not seen this film already yet?! Coco is beautiful; switch the audio to Spanish and embrace this heartwarming love letter to Mexican culture, people, and music.

The story follows Miguel, a young boy who dreams of a life as a musician despite his family's generations-long ban on music. When he meets his new friend Héctor, the two take off for an adventure in the Land of the Dead where Miguel gets to find out about the truth of his family history.

Coco is one of those animations that is technically made for kids yet has enough messages to appeal to an adult audience as well.

And for language learners, the Spanish used is uncomplicated and easy to follow. What a great way to practice the language!

Learning Spanish? Check out our free Spanish placement test to see how your level measures up!

Neruda will appeal to you if you enjoy a little fiction mixed in with your history. This film is an imaginative biopic of poet Pablo Neruda, following the investigation of a fictional police officer as he tries to track Neruda down.

Neruda is a glimpse into Chile's past and its government's crackdown on political dissidents — in Neruda's case specifically, Communists.

What follows is a cat and mouse kind of hunt that you'll instantly get sucked into, and whether your focus is on Neruda or the police officer Oscar Peluchonneau, there are ample voices for you to identify with if you are watching this to practice your Spanish.

Remember that the accent is Chilean, so perhaps compare it to the Spanish you already know! 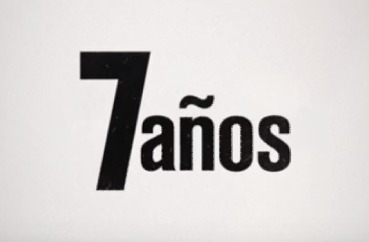 Seven Years was Netflix's first-ever original film in Spanish, so makes a great choice to end this list with.

It is an excellent film to give your attention to if you want to brush up on your Spanish because it is incredibly dialogue-driven.

Four friends sit down to discuss which one of them will go to prison for the crime they committed together. There is little more to tell you than that; the entire film takes place in a single room!

Though don't mistake this lack of action for a film that won't have you riveted to your seat. You have passion, fear, tension, and so much drama, that it might be worth sticking the subtitles on for your first watch just so you don't lose track of what's happening.

Honestly, one of the best Spanish films to watch for language learning.

Five beautiful films guaranteed to help you with your Spanish. It is time to make a choice now!