Could the Languages We Speak be Inherently Sexist?

The language we choose to use is important, both in terms of the individual words we say and getting our point across. Language reveals us, our values and our views in the words we choose and the ones we carefully omit. But what if our mother tongue is inherently biased in its word choices? What if the vocabulary we have to choose from shapes the things we want to express? Can languages really be accused of being sexist? Let's take a look! 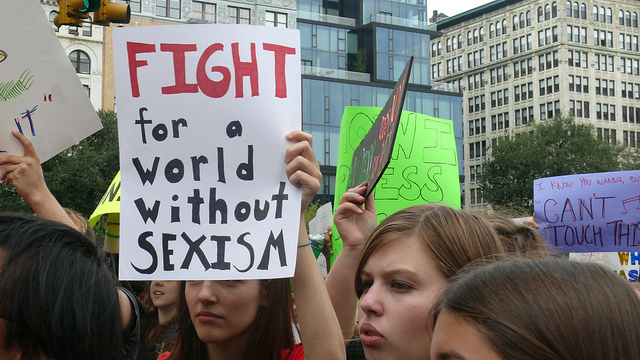 In romance languages such as Spanish where groups of mixed sex are generally referred to with a masculine form, the claim of sexism rears its head. Sons and daughters are referred to as hijos rather than hijas (girls) and hijos (boys), parents are padres rather than madres (mothers) and padres (fathers), and a group of children becomes chicos no matter the number of girls and boys present.

The same is true of French, where in a mixed sex meeting no matter how many women or men are in attendance, the group is typically addressed with the masculine ils instead of ils et elles. French also demonstrates this bias in terms of profession. Women in roles where there are no female equivalent titles are traditionally referred to with a masculine article; le médecin is a doctor and, at least according to language purists, cannot be changed to la for women doctors.

It isn't just the romance languages that put emphasis on the masculine over the feminine! In German we see the same pattern as above, where groups of, say, singers, are sängerin when it's just ladies, but mixed groups as well as men on their own are referred to as sänger.

However, it is not only a case of masculine dominance in terms of mixed groups or article use. Mandarin seems to assign roles for men and women, or status perhaps. Man (nánrén) is written as 男人 which includes the character 力 meaning power. Woman, specifically a married woman (fùrén) is written as 妇人, which includes the symbol for broom 扫! Talk about being put in your place.

A case of pejoration?

English has a different form of sexism to the language already ingrained in our minds.

We have historically taken the use of words and altered them to fit new meanings that tend to be slurs—against women. "Hussy" was a 13th century contraction of housewife that is now used to mean "a disreputable woman of improper behaviour". "Tart" was a contraction of sweetheart used in the 19th century that has become synonymous with "a female of immoral character", or "a prostitute".

Even equivalent professional titles have been belittled. Governor and governess had equal status during the 15th century but over time have come to mean "a man with authority over a place, institution, or group," whereas the title for women has been reduced to "a woman responsible for the care, supervision, or direction of a person". Madam had the same level of authority as sir up until the 18th century, when it came to mean "a conceited or precocious girl or young woman". And by the 19th century, the word "madam" transformed into the "female manager of a brothel". We're fairly sure it wasn't women who were pushing for such changes.

It's difficult to blame an entire language for being sexist when this is the tongue we have been raised to speak and don't have an alternative. And perhaps it's more to do with how the language is used rather than the language itself. We have to change in that respect; we are slowly working towards more respect and acceptance of gender neutral terminology, and perhaps less-sexist language will also follow the same path.

Defenders of the Spanish language say that masculine forms work for both men and for gender neutral expression, where médico means both male doctor and doctor of any gender, though some argue that this is more a convenience than a truth. But Spanish is also adopting new terms for other professional roles that used to have no feminine form at all. The word for mayor, el alcalde, only meant male mayors up until recently, with la alcaldesa meaning the mayor's wife. La alcaldesa is now recognised as the feminine form of mayor; a small change, but one in the right direction, perhaps? There is also popular discussion bubbling under the surface with directly replacing the "o" or "a" which assigns gender and simply changing it to an "e", however, some argue that incorporating "élle" as a 3rd-person pronoun is a long way off.

Change, however, is more difficult for some than others. France, for example, seems stuck firmly in the past, with its ban last November on écriture inclusive, or gender neutral/inclusive language. A punctuation point called a middot that was used to express a more inclusive form of writing, where friends (amis) became ami·e·s for example, is no longer allowed in any official government texts. Does that make French sexist? Perhaps it may show how desperately some French-speakers fear the pollution of their own language? Or maybe even the fact that the argument surfaced at all may mean that sufficient traction has been made so as to push these suggestions into the spotlight.

Deciding whether languages really are inherently sexist or not seems a difficult task, so we're focusing on the positives. Languages are evolving, adapting to change, and in doing so contributing to a more inclusive world. That, or perhaps we're just language geeks excited about all the possible neologisms these changes could bring!