Learning a Language through Social Media

There's a lot of things to be said about social media, both good and bad, and chances are there is at least a couple of social media apps on all of our phones. We know about the importance of networking, creating the right image, even using the latest meme to get our point across, but what about using social media as a tool for learning a language? Is it possible to use Twitter, Instagram, and all our other favourites to help us learn? Let's take a look!

They're everywhere, aren't they? Whether you worship every word spilling from the mouth of a Kardashian, or make heart eyes at the love between the various members of the Marvel cast, chances are if you're on social media of any sort, there's a celebrity or two that you follow.

So. What does that have to do with learning a language? Many things!

Now, normally, we wouldn't advocate looking at the comments sections of anything for fear of the worst of society getting a word in and having to read them. But an exception can be made for language learning, we think you'll agree. Because fans come from all over the world and speak all sorts of languages. Here's just a segment from a recent post by Will Smith on Instagram: 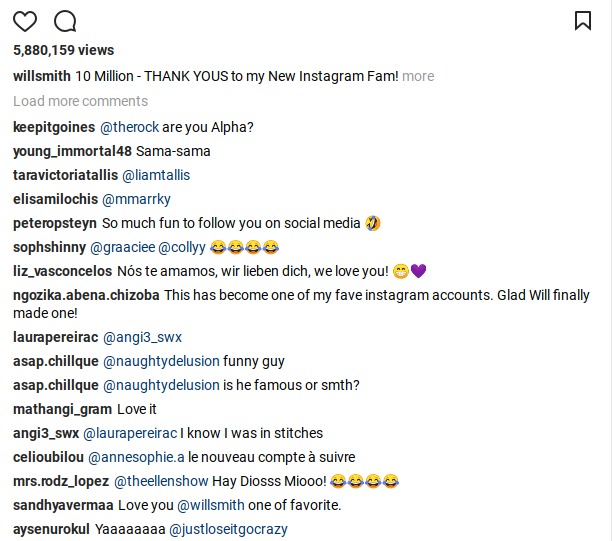 We've got some German, some Spanish, and some French amongst the English. We challenge you to look at the comments on any celebrity favourite's blogs or pages, and not learn the words for I love you in numerous languages in under five minutes.

Normally this term is something language teachers and students alike use to mean learning the vocabulary of a target language for a specific task, be that aviation or travel and tourism, or any other profession. But for social media, the chances are you already know a few words in other languages without even realising you know them. Likes, retweets, reblogs etc; if you have friends on social media that speak other languages, you might have seen any of these words in their language at some point. Especially those who like to screenshot their conversations for the world to see when they have a falling out.

Everyone loves a meme, right? Or at least, loves to loathe them. But if you look at them from a language learning point of view, they can be yet another quite way of picking up a few new words or a phrase—though we can't guarantee the usefulness of the phrase, of course!

Insert meme (and language) of your choice via Giphy

Many social medias like Twitter and Facebook offer instant translation. If you've been following events like the Olympics, outpourings of love and support for athletes from across the world has come in all sorts of languages, so that translate feature has come in handy! But the thing is, the more you read a feed on the subject you're interested in, the more you're likely to recognise a few words of other languages before they even need translating. It's not exactly language learning by assimilation, but it is a chance to learn without trying too hard.

More important than anything since we are by nature, social creatures, the biggest benefit of social media in terms of language learning is the chance to talk to just about anyone. The fact that there is a wealth of people to speak to in your target language cannot be understated; whether you're discussing the latest global politics or arguing over spoilers for an episode of your favourite show, with social media there is always something to talk about, and someone to talk to.

Did you know that many social medias are available in numerous languages? Twitter has 33, Facebook 101, Instagram 25, and even Snapchat has 20. So if you're feeling a little more confident in the language you're learning, why not change your settings into your target language? It is just a small change, but when it becomes second nature to do things in your target language that is a monumental step in the learning process.

Continuing to view social media as a tool, teachers of foreign languages often create Facebook groups or Tumblr blogs for their students to access, and language lovers generally tend to gravitate towards one another, finding ways to practice through group messages on Whatsapp, Facebook, and other messaging services.

The possibilities for social media in language learning is limited only by our imaginations!