Natural Selection and the Rules of Language

Despite being considered a humanities subject, language crosses boundaries with science more often than you'd think. With that in mind, it seems the jig is up. Sorry language sticklers: it appears that a new study by evolutionary biologists at UPenn looking at the natural patterns and standard use of English from 11 CE up to the 21st century suggests that the rules of language cannot be set in stone. Read on to learn about this linguistic discovery.

Yes, biology, though that might not be the first science you think of when it comes to talking about languages. Evolutionary biology proposes theories of natural selection and genetic drift to explain how we have evolved from a common ancestor into the richness of diverse species we have in the world today. But those same principles can also be applied to language changes over time.

Natural selection is the theory that organisms that are better adapted to their environments are more likely to survive and produce offspring than those that aren’t—think giraffes with long necks that can access food sources, and insects that can hide from predators thanks to camouflage.

For language, natural selection can operate in the same way. The team at UPenn led by Joshua Plotkin found that selection could be behind the changes we’ve seen in the structure of negative sentences over time; Old English Ic ne secge became the Early Modern English I say not, as an example. Now, perhaps it isn’t survival at stake here, but it is about blending in with your environment. If you walked into a room today and said, well, either of these phrases, actually, chances are you’ll be perceived as an outsider (or worse), and you’ll have to either adapt your language to fit in with today’s English, or move elsewhere, where such language is still used (or join a reenactment group, or something). 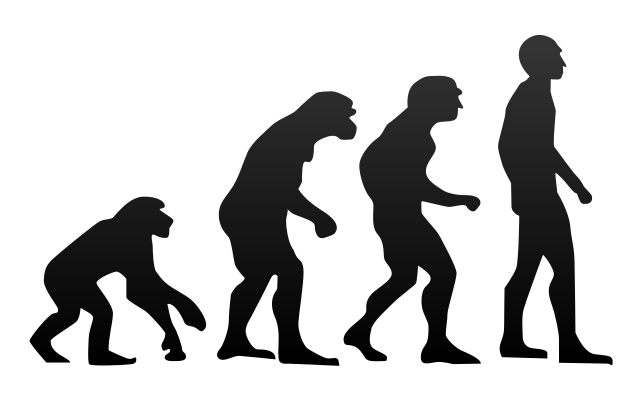 Genetic drift describes fluctuations in gene variants, when the occurrence of alleles increases or decreases over time. We’re not suggesting genetics are at play when it comes to language evolution, but the principle of random drift is easy to apply. Random chance in fact is thought to be a large contributory factor in deciding what we do to our language. The UPenn study looked at more than 400 million English words used since 11 C. E. and can provide numerous examples.

In the typical rule with exceptions that is the nightmare of both English student and teacher alike, it makes sense that adding -ness to the end of words makes nouns out of adjectives. So it should then follow that when we speak of freedom from ambiguity or indistinctness, we should use the word clearness. But whilst clearness is a valid word, and accurately describes this definition, there is a preference for clarity, which has exactly the same meaning, but doesn’t follow the logic of adding -ness at all.

Past tenses have seen perhaps the biggest influence of random drift. How else could we explain things like American English adopting the -ed ending instead of -t in words such as spilled/spilt and quit/quitted, without citing a deliberate divergence from British English? There is a tendency to rhyme irregular verbs, and this acts as a sort of ‘gravitational force’ for those words around them, dragging other words into that rhyme. It’s random, but it’s also bound to happen, then.

Do over time has become an auxiliary verb, with phrases such as you say not used back in the 1400s having been replaced with you don’t say, and do forming questions such as do you dance when strictly speaking it isn’t a question word. The researchers could find no selective pressures forced on these changes and therefore could come to no other conclusion that the selection of such words was random. And since imitation is the sincerest form of flattery, these changes could have drifted into our regular vocabulary quite by accident, incorporating the language of those we admire—even if grammatically, they were considered wrong.

Changing with the times

Of course, we would expect the words we use today to be vastly different than those used in the distant past—it’s unlikely many of us would use the same vernacular as Shakespeare in our everyday speech, for example. But language does change with influences on our society; 200 years ago we might have said a swimmer dived, but now it’s more common to say dove, and this change can be linked with the arrival of cars, for which we use drive and drove—as well as that need to rhyme things, which means we’re all secretly poets.

Technology has perhaps allowed for an even more rapid random drift of our language, with grammar rules becoming outdated for those using social media to communicate, and whole other words being invented on a daily basis every time we go online.

In conclusion, language is evolving, and there’s nothing you can do about it; hold on tight, embrace the change, we’re making this up as we go!