There might be one or two of us who’ll be glad to see the back of 2017. Some probably even went to bed long before the big gongs started and woke up in 2018 hopeful of better things to come. Although the festivities should have ended by now, check out a few traditional festivities that went down as the clock struck midnight in preparation for the new year. It's never too early to plan for next year!

Where it’s not a New Years celebration at all, technically: it’s Hogmanay. We’ll have a little language nerd-out first, since that’s what we do: the origin of this word is mysterious, with everything from Hoggo-nott—Scandinavian for celebrating the feast before Yule, to hoog min dag from Flemish meaning great love day, and up to the Gaelic oge maiden—new morning, being cited as a possible influence.

Hogmanay is in fact a three-day celebration with highlights including a ceilidh at the castle, and more concerts and street festivals than you can shake a stick at. The entire affair culminates in a six-hour street festival leading up to midnight on the 31st—which is actually kicked off by a torchlight procession through the city started the day before—with 4.5 tonnes of fireworks being set off over the castle as the surrounding streets break out in Auld Lang Syne.

Since it’s sort of in the vicinity of Edinburgh, New Year's in London has always been marked out by the chiming of Big Ben at midnight. It is thought that around 250,000 New Year revellers line the banks of the Thames and along its bridges in preparation for the ten-minute firework display above the London Eye, Houses of Parliament, and the Shard. 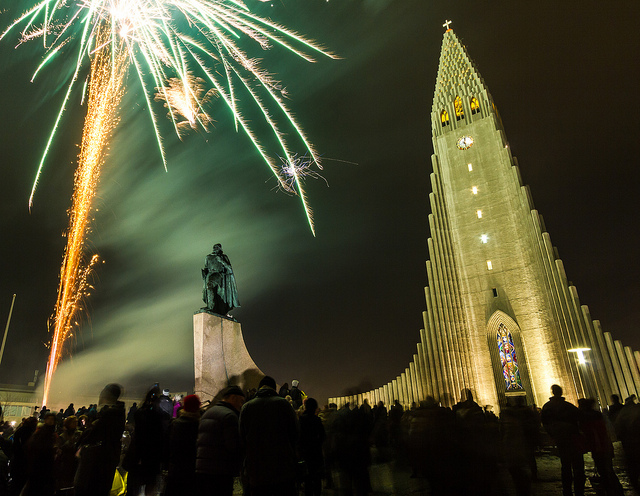 Reykjavík is often described as the home of an authentic New Years celebration, and first things first; if anyone is going to take credit for the spectacle that takes place in Iceland’s capital at New Year's, that has to be the good people of Reykjavík themselves; there are no state-organised celebrations at all—every last festivity is down to the locals!

There are community bonfires around which people sing, dance, and play music—symbolic of burning and chasing away the troubles of the previous year, then at 11:35pm exactly, almost all residents of Reykjavík take to the streets armed with fireworks; right after the mass-watching of the satirical TV show, Áramótaskaup, of course. Fireworks are set off late into the night, or into the early hours of the morning, depending how you look at it, and if you want to behave like a true local post New Years Eve celebrations, then you should grab yourself a hot dog and set off for the hot springs.

Now this city might not be the first one that comes to mind for New Year's, but it’s absolutely worth a look. Bratislava offers family festivities from midday onward, and the beautiful medieval town centre is taken over by a street party that incorporates both traditional and modern entertainment that involves a lot of singing and dancing. And if that sounds far too twee for your tastes, have no fear; there are a multitude of the more typical clubs you might want to frequent to see in your New Year your way.

New Year's celebrations in this Brazilian capital are said to attract around two million visitors each year. There are elaborate firework displays over Copacabana Beach, where it’s traditional to dress all in white and dance and drink champagne until sunrise. And if the beach is not your thing, then like the rest of the year Rio de Janeiro is renowned for its parties in various clubs, bars, and hotels around the city.

Bangkok plays host to some of the best New Year's celebrations and festivities in Asia, with rooftop bars to watch the fireworks set off at midnight being a particular draw. The Centralworld Shopping Centre always attracts large crowds for a New York-feel street firework countdown, with a crowd of more than 100,000 gathering. Entertainment is generally provided with live music and DJs, and street vendors will be on hand if you’re needing a snack. There’s also Asiatique, a sophisticated riverside spot where people begin to gather from 5pm onward, with the entire celebration there being broadcast on TV.

The Best of the Rest

Since it’s near on impossible to cater to everyone’s tastes, and always a possibility to miss out a favourite. City-style New Years can be found in places such as New York, Berlin, and Sydney. More relaxed ones in The Algarve or Paradise Island in the Bahamas. And for a carnival-like atmosphere, you could head to either Las Vegas or Valparaíso in Chile; the options are truly endless. But however you spent your New Year's Eve, we hope it was magical and are so looking forward to another year with all of you!