4 Reasons Why Portuguese Isn’t as Hard as You Think

This entry was posted in language guru and tagged Language classes, learn languages, Learn Portuguese, Portuguese on November 20, 2015 by Paul . 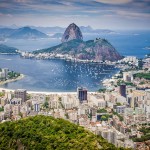 With over 200 million speakers and growing, Portuguese is one of the top spoken languages in the world, and is used widely in many fields such as business and tourism. For English speakers, however, learning Portuguese grammar can be an intimidating prospect. But don’t let its unfamiliar nasal sounds and numerous verb conjugations intimidate you:(…)